Posted on at by Peter Schilling 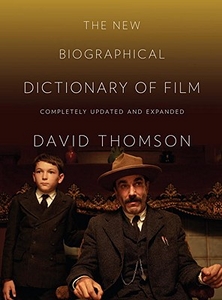 My favorite film book, David Thomson's New Biographical Dictionary of Film, has a new edition out just in time for the holidays.

Thanks to the publication of the newest edition of David Thomson’s wonderful New Biographical Dictionary of Film (2010, Alfred A. Knopf, $40), I thought it would be nice to discuss favorite movie books. Honest to God, I had no intention of writing a piece that would get you and yours out to the malls to shop, much less on this horrific post-Thanksgiving weekend. For the love of all that is holy, I might add that you should, in fact, run screaming in the other direction. On the other hand, you can get many of these precious tomes at your local bookstore (like, say, Chop Suey Books…) Or, if you’re not going to give them away, head out to your local library. Bottom line: don’t just watch the movies, read for Crissake!

I love reading about the movies, to the extent where my wife, poor thing, has to endure pausing what we’re watching so I can look the thing up in, say, Thomson’s Dictionary, or the Film Noir Encyclopedia. Reading about film gives us a richer understanding of it–depending on the critic, of course. If you love the silver screen as I do, you seek out critics. For me, I used to have a subscription to New York magazine in the 80s, during high school, because it was the only way for a boy from Mt. Pleasant, Michigan to read his favorite critic, David Denby. Interestingly enough, I now cringe whenever I see it’s his turn to review in The New Yorker, such is my dislike of him now. Over the years, I’ve been smitten, and then cooled, by such luminaries as Pauline Kael, Denby, The New Yorker’s Anthony Lane, Thomson, The Onion’s Nathin Rabin, and old farts like Manny Farber and James Agee. Those guys really got me to thinking, and it is from their wrangling with the movies that got me started seeking out films, and seeking out books. These are some of the best, and I really think the film lover in your life will enjoy them. Or, as I said, maybe you’ll enjoy them. This doesn’t have to be a holiday gift guide, after all.

For me, all film titles begin and end with Thomson. Mostly because he moves me more than any other critic, and because he’s taken the time to create two blockbusting reference works that are so damn entertaining, I just can’t stop reading them. One is the aforementioned New Biographical Dictionary of Film, the other is “Have You Seen…?” (2008. Alfred A. Knopf, $39.95), a thick collection of a thousand essays, each a thousand words or less, on pictures he believes worth talking about. Not his favorite, mind you, but films worth discussing.

Thomson is nothing if not opinionated. But he wears these opinions on his sleeve, makes clear and concise arguments, and is so full of himself that he goes out on a limb to make bizarre cases for strange people and stranger movies (often made with strange arguments…) Cases in point: he is obsessed with both Angie Dickinson and Nicole Kidman; he considers the BBC’s Red Riding Trilogy to be greater than The Godfather (Red Riding is good, but really uneven); he nearly loathes Chaplin and Kubrick. Of the last two, perhaps that’s part of the deal–I not-so-secretly leap for joy hearing someone share my distaste for Kubrick.

More than anything, though, Thomson is just a great writer. In both volumes, you’ll find a man passionate about movies, who also has great faith in his readers–he truly believes that you are as passionate, and that you seek to be challenged, both by his prose and the movies you watch. There have been a ton of little movies I’ve seen thanks to “Have You Seen…?”: Act of Violence, one of the greatest noirs I’ve ever seen; and The More the Merrier, a heartbreaking and lovely comedy that I’ve tried to make everyone watch again and again. These are just two of the movies he’s turned me on to.

But Thomson also loves the character actor, and so do I. The Dictionary devotes a number of poignant little essays about the forgotten people of cinema, those character actors he considers the “glue” of a story. That’s what I love about him: in the current edition, we don’t just get the new stars since the last issue hit bookstores in 2002: yes, there’s the Gyllenhaal siblings, Anne Hathaway, more on Christopher Nolan and Wes Anderson now that they’re big, and guys left out who should’ve been in before: Richard Linklater and Takashi Shimura among others. But he includes, for the first time, John Cazale, who was a great supporting actor in the Godfather pictures, Dog Day Afternoon, The Conversation, and The Deer Hunter. That’s all he made, five movies, all of which were nominated for Best Picture.

Well, here is how Thomson closes his essay on Cazale: “I don’t have anything else to say except that it is the lives and work of people like John Cazale that make filmgoing worthwhile. In heaven, I hope, there will be no stars, just supporting actors. And one of the great strengths in American film is such people. But it is a weakness, too, in that the code continues to insist there are more important people. There are not.” Simply beautiful. 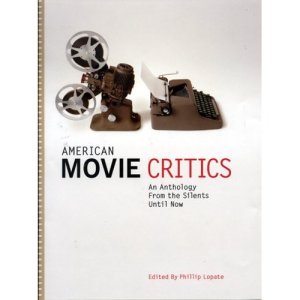 Leaving Thomson for a moment (oh, but he’ll return), here’s a great start for someone seeking to look into the great critics of the past: The Library of America’s American Movie Critics: From Silents Until Now (2008, Library of America, $19.95). This exhaustive collection includes the work of notable grouch Manny Farber; the poet/hobo Vachel Lindsay; the passionate and often journalistically sloppy Pauline Kael; Andrew Sarris, inexplicably (in my mind) regarded as the father of the auteur movement in America; and, one of my favorites, the crazy James Agee, whose reviews in The Nation were adored by poet W. H. Auden, and who went on to write the screenplay to Night of the Hunter.

But there’s more than critics–there’s often what I call “the story of the picture”, those great books about some movie that changed the landscape of film in some way. Two of the best are the late Steven Bach’s Final Cut (1985, Newmarket Press, $19.95) about the disaster of Heaven’s Gate, which destroyed United Artists; and Mark Harris’ exciting Pictures at a Revolution (2008, Penguin, $17), about the five best picture nominees of 1967, and how they represented the transition of old, hidebound studio films (like Doctor Doolittle, which was nominated for Best Picture!) and the new, auteurist films modeled after the French New Wave (like Bonnie and Clyde and The Graduate.)

Both books are ripping yarns, Bach’s Cut perhaps the most impressive because he was one of the executives who succumbed to the mania of Michael Cimino (Gate’s director) and yet he is as damning on himself and the executives at United Artist as he is on the lunatic behind the camera. Harris’ book ties five different storylines together, yet Revolution is never confusing, and harkens you back to a time when people really cared about film criticism. Both are page turners, and well worth seeking out.

And now for the truly strange. Louise Brooks was a sexy young girl who rocketed into movies in the late 20s, starring in the amazing silent movie Pandora’s Box. Apparently, she refused the crappy roles Hollywood tried to force feed her, insulted various executives, slept with whomever she wanted and felt no remorse, and because of her sass was out of pictures and selling perfume at department stores in less than five years. In the 1970s, executives from The Eastman House, that lovely repository of silent film, sought out Brooks, then a recluse, to come to Rochester, NY to live at their expense and essentially be a historian of that era.

She began writing brilliant and caustic reviews and essays for a number of magazines, most notably Britain’s Sight and Sound.  The compilation Lulu in Hollywood (orig. 1974, this ed. 2000, University of Minnesota Press, $19.95) is strange and sad and mysterious and damn wonderful. For a very opinionated and insider-y view of old Hollywood, and an examination of an amazing character to boot, you can’t miss this one. 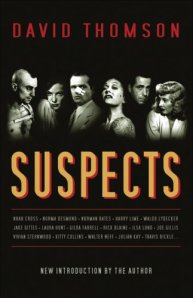 Suspects (1985, No Exit, $13.95) is David Thomson’s novel. Only it’s not a novel. It’s a collection of short stories, histories really, of your favorite characters from your favorite movies, detailing, like a report from a private eye, the lives and times of people like Jake Gittes, Richard Blaine (Bogie in Casablanca), Sally Bailey (Susan Sarandon in Atlantic City)… even some very obscure characters, like Alma McCain, a young hussy played by Tuesday Weld (from John Frankenheimer’s I Walk the Line.) For instance, we learn that Jake Gittes was the son of a whore, get to see how he came to be a private eye, where he went after that (nowhere after ’72–he vanished after time in Saigon…) Each essay is really thought-provoking, and while I don’t always agree, I’m impressed with the writing, and the balls to examine people who are as rich and complex as their brief sojourn in the movies from which we know them.

Finally, I’ll leave you with a very straightforward, but essential reference work: Film Noir: An Encyclopedic Reference to the American Style (1992, Overlook/Duckworth, $35.00.) This great book, edited by Alain Silver and Elizabeth Ward (and which was a great gift from James River’s James Parrish–thanks again, man!) is both a reference and critical work, with summaries of each picture, cast and crew listings, and an essay rounding out each entry. It is lavishly illustrated, and something you must own if you’re into film noir (as we–James and I–are.) One caveat, which doesn’t bother me: the summaries of the film tell you everything, from start to finish. If you don’t want to know the ending, skip that part–they’re separate from the critical essay. This is a great book, written by a dozen different noir fanatics, and its passion shines through.