Posted on at by Todd Hunter Starkweather

The Academy Awards Show airs this Sunday, and while I will not attempt any sort of dissertation on what is wrong or right (but mostly wrong) with the Academy Awards, I will simply assert that, at the bare minimum, Sunday night’s gross spectacle provides an opportunity to discuss and think about films.  There are a few things that I do wish to see on Sunday evening, and here are my five favorite.

Despite my hope, this will not happen.  I do not think that anyone was better than Oldman, but he does not travel in the exclusive Hollywood circle that George Clooney does, nor was he in The Artist (2011).  Therefor, his chances of holding a statuette are worse than minimal.  However, at least his nomination in a prominent category gives a little more publicity to Tinker Tailor Soldier Spy (2011), a film that I feel has been vastly overlooked.  Indeed, I think its director, Tomas Alfredson, was worthy of a best director nod.  TTSS is also nominated for best original score and best adapted screenplay. 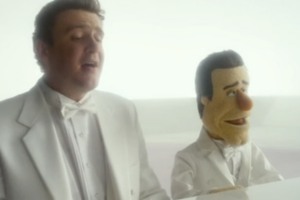 I enjoyed The Muppets (2011) more than some of the films nominated for best picture, and I will enjoy the performance of its signature song “Man or Muppet,” which is nominated for best original song.  If the telecast employs the characters from the film, Jason Segel, Jim Parsons, and their muppet counterparts should provide an entertaining four minutes.  I am disappointed that “Me Party” was not nominated.  I would love to watch Amy Adams perform that joyful number once again.

Due to rules more complicated and obtuse than number theory,  historically terrific and notable documentaries have often failed to win or even garner a nomination in this category.  (See Hoop Dreams and Grizzly Man).  However, this year’s crop of five is rather promising.  I wrote about the fascinating If a Tree Falls: A Story of the Earth Liberation Front (2011), and Peter Schilling, our James River Film Journal colleague, raves about Wim Wenders’s Pina (2011). I have only heard great things about the final three nominees: Undefeated (2011), Hell and Back Again (2011), and Paradise Lost 3: Purgatory (2011).

Unlike my desire to see Oldman emerge victorious, my wish to see Rango win has a more than plausible chance of being fulfilled.  I thought that Rango was great and believe that it is deserving.  Its chances are only enhanced by the relatively weak field around it.  Pixar usually owns this category, but Cars 2 (2011) was so dreadful that it was bumped out of this year’s nominee field by Kung Fu Panda 2 (2011).  Aside from being the best animated film of 2011, Rango may also have been the best Western.

Christopher Plummer and Max von Sydow are both nominated in this category.  Both are 82 years-old, and both are still producing great work.  If either one wins, it will not be a John Wayne/Henry Fonda/Jack Palance moment: charity for an old man.  No, both nominations are fully justified, and either Plummer or von Sydow will have earned the Oscar on the strength of their respective performances and not on the residue of their past.