Posted on at by Todd Hunter Starkweather

I have previously posted about the difficulty of finding quality films made with children as the target audience.  However, I am a sucker for taking my children to the movies, so I inevitably sit through clunkers such as Gnomeo and Juliet (2011), Rio (2011), and the lamentable Diary of a Wimpy Kid (2010).  I have to remember to thank my eldest son, Emmit, for not making me take him to the second film installment of the Diary of a Wimpy kid franchise, Rodrick Rules (2011). These films have the same basic plot and structure, take no risks, and are imminently forgettable.  Not only do my children quickly forget about the film experience, they often become bored during the film itself. Wrangling them inside a dark theater would often prove frustrating if I was in any way enjoying the film.  More often than not though, it provides a way to kill time.  One day soon I am going to develop and patent a mathematical formula that calculates a film’s entertainment value by measuring the differential between the film’s running time and the number of times my youngest children, Quincy (6) and Lorna (4), wander into the aisles or examine the filth on the ground.

Still, there are moments when I watch a film with my children and both they and I come away satisfied.  Currently playing at The Byrd Theatre, Rango (2011) is just one of those films.

My initial expectations were not high.  On the surface, Rango would appear to mimic the formula of many other children’s films.  Use animals or other creatures as characters, place said animal or creatures within a well known and tested plot line, hire movie starts to provide voiceover work, and, finally, count the box office revenues.  Certainly, Rango does not forsake this sacred model, but, despite its apparent conventionality, it offers unique moments and proves to be entertaining to children without insulting my, or their, intelligence.  In fact, many moments of the film prove to be more insightful than many of the big summer blockbusters. (I know. That is setting the bar awfully low.)

Directed by Gore Verbinski, the architect behind the first three Pirates of the Caribbean films, and starring Johnny Depp, the actor behind the pirate icon Jack Sparrow, Rango tells the story of a pet lizard, voiced by Depp, thrown out of the back seat of a family station wagon.  Left to his own devices to survive in a parched and inhospitable “West,” the lizard takes on the persona of Rango, a legendary gunfighter.

Rango quickly discovers that “Dirt,” the small town into which he has stumbled, is in crisis, and he is named sheriff by the town’s mayor, voiced by Ned Beatty, who, with his turn as Lotso in Toy Story 3 (2010), is becoming adept at voicing dastardly cartoon characters.  The animated story is filled with various forms of desert varmints (mammal, bird, reptile, and amphibian) who seek to solve the drama engulfing Dirt.

Verbinski keeps the film well paced, a must for a children’s film.  I may appreciate a slow developing, introspective film by myself or with my wife, but with children in a theatre, slow introspection only creates opportunities to crawl over seats.  Well paced and directed animation also allows for the type of gut-busting visual hilarity that only animated sequences are capable of producing.  One scene that involved cactus juice, a cigar, and a fiery belch induced spontaneous and uproarious laughter from all adults and children in the theatre.

Yet the quick pace does not prohibit the film from commenting rather sharply and smartly upon both the nature of the cinematic Western, upon which it draws, and the politics of the West itself. 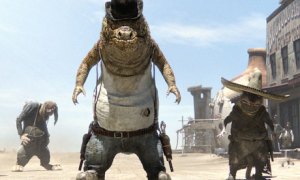 This commentary is brief, almost fleeting, but it is made succinctly with resonances of Chinatown (1974), There Will Be Blood (2007), and Sergio Leone’s Fistful of Dollars trilogy (1964-1966).  There is even a well honed “Clint Eastwood” reference/appearance. In many respects, Rango is a more intelligent Western than much of the Western fare that Hollywood as recently produced.

A lot of what makes Rango work is Depp’s voice.  Ever since Jim Jarmusch’s Dead Man (1995), I have wanted to see Depp in more Westerns.  Hopefully, some screenwriter or director will recognize that a gracefully aging Depp would make a better Western character than Russell Crowe or Vigo Mortenson.  For now, I will settle for Depp’s voice inside a reptilian Western hero.  His voice subtlety adds depth to the slender character.  His range allows Rango to change from lost outsider to insider without any jarring incongruity.  Depp avoids the dry, pointless delivery that so many of his Hollywood brethren provide for large animated features.

One of my biggest pet peeves about animated films is the insistence on hiring expensive stars to provide voices for cartoon characters. More often than not these stars prove most ineffective.  I can watch hundreds of run of the mill cartoons on Nickelodeon or CartoonNetwork and find twenty voices more adept at animation voice-over than the likes of Angelina Jolie and Jackie Chan.  Jolie’s ability to be seductive and sultry and Chan’s penchant for kick-ass kung-fu do not translate to voice-over work.  Yet studios must possess some spreadsheet that tells them that either children or their parents (or both) actually care about who provides the voice.

A note to studios: nobody cares about who provides the voices for cartoon characters.  Not a single child knows what Tom Kenney looks like or who he is.  (Well, if he has children they probably know.)  Yet, thanks in large part to his elastic and expansive voice, SpongeBob SquarePants has become the modern-day Bugs Bunny.

Fortunately, Rango‘s voices, stars or otherwise, prove up to the task of bringing the animation to life.  (Bill Nighy, who also worked with Verbinski in the PotC franchise, is another adept voice as Rattlesnake Jake.)  While it is only a few months old, Rango gives off an initial appearance of a cartoon that will age well and be enthusiastically viewed by children years from now.  For a family movie going experience, Rango at The Byrd Theatre is a welcome and refreshing treat.

(According to The Byrd Theatre’s own website, as of Tuesday, 31 May, Rango is currently scheduled to run through this Thursday, 2 June.)