A Documentary Worth Getting Stung For by David Stover

Posted on at by James River Film Society 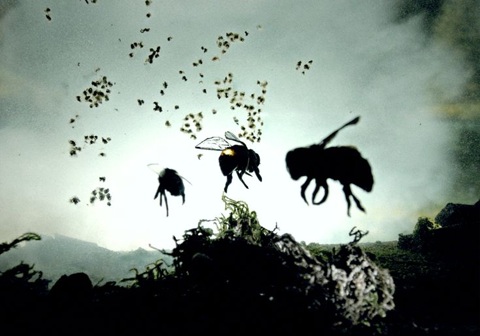 Honeybees are not usually a topic of film discourse unless maybe it’s Irwin Allen’s The Swarm (1978) starring Michael Caine, Katharine Ross and a boat load of other famous tired actors. Honeybees have been in the media quite a bit lately with the advent of Colony Collapse Disorder. That’s where I come in. I started keeping bees four years ago for no good reason except it seemed an interesting way to spend my time. I’ve since become somewhat obsessed with the workings of these creatures and in the process I have become more and more pissed off at what we humans are doing with this world we inhabit. So instead of just grumbling and griping about how bad things are (though I do my fair share of that) I’m trying to bring a glimmer of hope to this sinking ship.

On Thursday, March 31 there will be two showings of the documentary film Vanishing of The Bees at the Science Museum of Virginia at 2:00 p.m. and 6:30 p.m. (Click on those times to go to the James River Film Society’s Facebook Page event invitations for these two screening. That way you can let us know you’re coming and help us spread the word.) These showings will be facilitated by Christy Hemenway of Goldstar Honeybees.

The showings are FREE! and no one will twist your arm to make any kind of donation to anything. Vanishing is the story of two beekeepers who find their bees are disappearing from their hives. One day everything is fine. The next … no bees. The filmmakers follow these beekeepers around the world as they search for answers which are still elusive and perplexing to beekeepers and scientists. While no one has a complete answer to the question “where have the bees gone?” the possibilities for redemption are offered for those who are willing to alter how they relate to life outside of their own four walls. I hope you can make one of the showings. Beekeeping changed how I think and relate to the world … but getting stung still hurts.