Warm and Smooth: The Sound of Analog Audio Recordings

Posted on at by Jacob Dodd 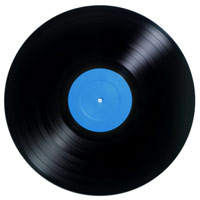 When most people think of analog audio they might think of the compact cassette tape.  A modest technology that pushed the realm of portable sound and forever changed the landscape of human interaction with recorded music.  The Sony Walkman was the coolest device you could have.  There was nothing like creating your own mix tape from your boom box radio or your vinyl LPs.  Today, the 1/8″ cassette tape sadly represents all of the inconveniences and problems with analog recordings.  Tape hiss, wow and flutter, and rewinding the tape with a pencil after it had been eaten by the deck.  We live in such an age of information access and sharing that we focus on acquiring music and sounds, but we forget to truly listen.  Musicians and filmmakers understand the power of a well recorded, accurately edited, and delicately mixed piece of sound art. 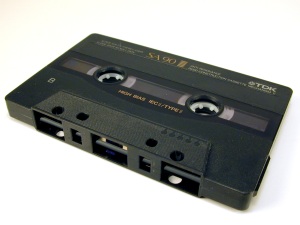 Analog sound has always topped the list as the preferred listening experience for audiophiles.  Mainly because our own ears receive audio in analog.  It is without a question that the vinyl LP delivers the most warm and lush sound one could ask for.  The album represents the purest form of analog.  The stylus reading the grooves translates into a very live and personal experience for the listener.  Sound waves simply emanate from the turning album, travel along the tone arm, into an amplifier and out through the speakers – no translation or mediation necessary.  The fact that analog sound does not have to be converted to bits of 1s and 0s like digital is what makes the sound so full of life.  We are actually hearing Miles Davis’ trumpet or Nat King Cole’s voice.  On top of this the turntable begs interaction, as one has to physically stand up and flip the album over.  Instead of listening to the first 30 seconds of a song and skipping to the next track or jumping to a random selection (I have seen many many people do this on their ipods.).  Vinyl users learn patience and are rewarded with an appreciation for the art of each song. Each track relates to the next to create the cohesive art form of the album.

Sound has been with film since the beginning.  Thomas Edison and his team saw the potential for synchronizing the phonograph to the Kinetograph (motion picture camera), and engaged in numerous experiments.  One such experiment was the Kinetophone, an early sound film system developed by William Dickson in early 1885.  One can view a restored version of the Dickson Experimental Sound Film on the Museum of Modern Art’s Edison: The Invention of the Movies DVD. Recently, the wax cylinder audio was synchronized to the picture by renowned sound designer Walter Murch.

When the gramaphone  record (sound on disc) was invented by German inventor Emile Berliner, it made disc recording viable and more versatile than Edison’s wax phonograph.  The Vitaphone company adopted the sound on disc technology and adapted it to moving images.  In 1927, Vitaphone had a huge commercial success with releasing the first major sound feature film, The Jazz Singer. However, the sound on disc format had numerous flaws for film exhibition, one large flaw being it depended heavily on the theaters to synchronize the disc to the film print.  Soon after the success of The Jazz Singer, the sound on film process was perfected.  This process used light to read an optical track that was printed directly on the film print itself, and thus making commercial distribution more stable. 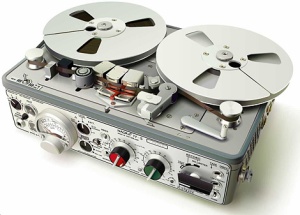 Another major innovation in sound was the portability of the equipment.  Nagra Kudelski, a Swiss company, really pushed the envelope with precision engineering.  The Nagra IV-S stereo and the 4.2 are legendary 1/4″ recorders.   The IV-S became the preferred film sound recorder into the 2000s. When recorders became more portable, it gave the filmmaker the ability to take the recorder out into the field to capture all sorts of sounds.  Actual air planes, waterfalls, and major events could now be captured on 1/4 inch tape which then could be recorded, manipulated, and edited.  Direct Cinema and Cinema verte styles emerged in the 1960s due to these important sound innovations.  Together with the small and quiet 16mm cameras, one could work in a more observational way.  The Eclair NPR camera/Nagra 4.2  recorder was a great duo for years. Later, the Sony WM-D6C would team up with the top quiet 16mm cameras (Eclair, CP-16, and Aaton LTR) to really bring a versatility to the world of guerrilla filmmaking.

The recorders below are ranked by construction quality, recording quality, and professional features.  Frequency response is used to show how each recorder performs.  The standard human hearing spectrum ranges from 20Hz-20kHz.  The closer a recorder is to these specs the better. 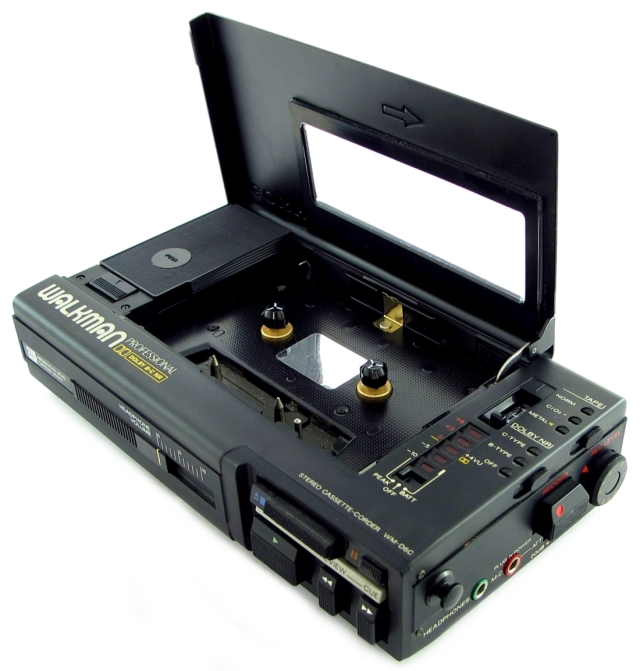 This is no ordinary walkman.  With a stereo microphone input and a 40Hz-15kHz frequency response, one could record rock concerts with stealth.  The D6C could be modified to have a crystal sync generator, which made it the smallest sync recorder.  These professional film upgrades 20 years ago would have been worth about $1,000.  BBC among other radio stations, recording studios, musicians, and animal researchers  adopted the WM-D6C as a replacement for 1/4″ reel to reel recorders.  The compact design was liberating.  One other major advantage of the professional walkman is that it could record with Dolby B and C noise reduction.  Noise reduction was an innovation to improve signal to noise ratio, thus filtering out tape hiss.  Some people love noise reduction while others do not – it is a very subjective preference.  With Dolby C, one could capture 71dB of audio vs. 58dB with the feature turned off. 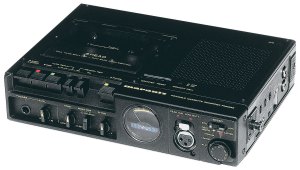 These have been a staple of voice recording for many years.  The recorder captures mono sound through a balanced XLR input connection.  The three head system allows you to listen to your recording directly from the tape while recording.  Normal, CrO2, and Metal tapes can be used with the pmd-222.  These are very affordable units costing around $100 used. 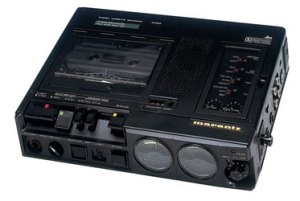 Known for its Dbx noise reduction capabilities, the PMD-430 has become famous for making high fidelity tapes from vinyl recordings.  It’s stereo line inputs plus Dolby and Dbx noise reduction systems made this system great for live recordings and vinyl transfers.  Some people feel that the portable Marantz (especially in Dbx mode) rivals high end Nakamichi tape decks.  Dbx is more powerful than Dolby C and nearly eliminates tape hiss altogether.  However, with any noise reduction recording one must play back in Dolby or Dbx to receive the benefits.  Dbx being more niche the Dolby makes it less likely that other decks will be able to properly play back the recording. 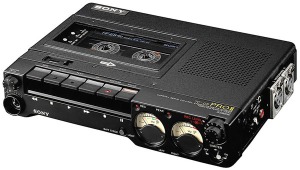 A highly sought after portable cassette recorder with stereo XLR inputs is the Sony TC-D5 Pro.  Made for broadcast and filmmaking, the TC-D5 Pro II had updated components (over the earlier TC-D5) that met professional standards.   One only needs to feel the metal construction and the solid “piano” key buttons to sense the quality.  Sony had a higher reputation of durability over the Marantz systems. The ferrite head in the Pro II contained metal shielding to reduce hum, and the recorder was coated with a camera finish rather than matte black.  The TC-D5 series had a disc drive servo for superior stability, a feature that outclassed the competition.  Stability in tape recorders is very important to reduce distortion and wow and flutter.  As strong as this model was, it did not have the capability to record to the high bias metal tapes nor contained line inputs.  The device was strictly geared for location recording. 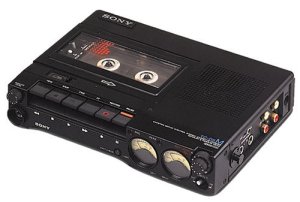 Many consider this recorder to have the best balance between professional build and feature capabilities.  Although this recorder was geared toward the prosumer, many professionals used it because it had mic and line inputs.  One could also record on the higher bias metal tapes (hence the “M”).  With metal tape the frequency response is nearly the full audible spectrum, making better recordings than the Pro II.

If you have not had the opportunity to listen to analog sound and revisit the vinyl album or cassette tape, now is the time.  Vinyl stores are in full swing and you can find all genres of music on new and used vinyl.  Turntables are available for all levels of users.  Commercial cassettes were never recorded well (high speed dubbing on type I normal bias tape), so no need to seek after them.  What you need to do is pick up one of the recorders above and some Maxell XL-II, TDK-SM60, or Fuji DRII 60 blank tapes and begin making your own recordings.  Professional Type II (Chrome tapes) are beginning to disappear, so buy in bulk if you can.

The Sony TC-D5M can be picked up on ebay for $100-$200.  Pro Camera, Inc. in Charlottesville can service certain tape machines if the one you pick up needs a clean, lube, and adjustment.  To receive optimum results with any analog recorder, you need to have a clean, well calibrated machine.  Analog recording takes an attentive, patient, and dedicated person.  It is not a push a button and let the machine do the work medium.  Like film, it is a collaboration between you and the technology.   Rewind and head back to a time when sound was warm and smooth!

7 Responses to Warm and Smooth: The Sound of Analog Audio Recordings